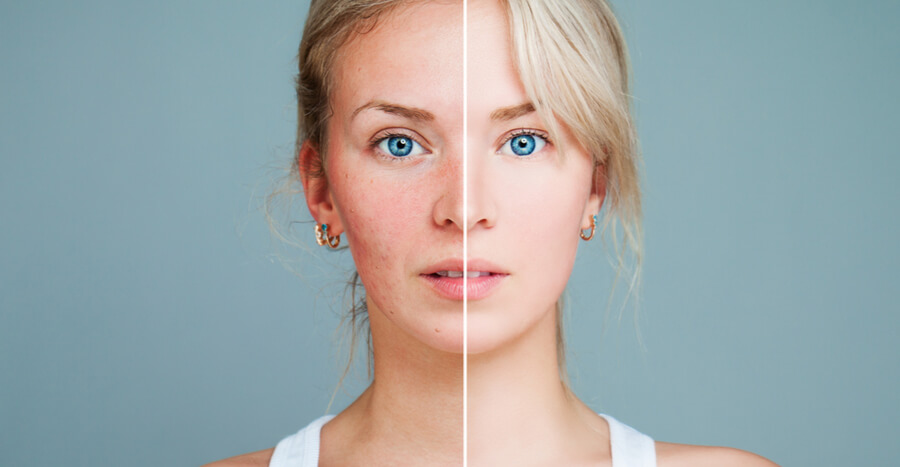 Affecting approximately 45 million people worldwide, rosacea is a chronic skin condition that is typically involves fair-skinned individuals between the ages of 30 and 50. Rosacea appears to be more common in women than men – although men tend to experience more severe symptoms. While the exact cause of rosacea is unknown, each sufferer will have specific  ‘triggers’ which cause the rosacea to flare up.

Cases of rosacea range from being very mild to more serious. The more serious cases are rare and take several years to develop. Either way, rosacea is difficult to control and may cause you to feel self-conscious about your skin. Many people will attempt to reduce redness with makeup, which has the potential worsen the symptoms.

Having a red face is also a very common condition, although generally not as severe as rosacea. Most redness involves uneven skin tone that results from sun damage. A red face can also be the result of superficial dilated facial veins such as broken capillaries or spider veins.

Red face and rosacea treatment varies on how severe the symptoms are. Lougheed Laser Centre has three options to reduce redness, including laser treatment which can help target deeper or larger blood vessels.

Laser Genesis is a rosacea treatment usea at our Delta location that utilizes a comfortable, non-ablative laser to treat general diffuse redness. IPL Photorejuvenation uses intense pulsed light to reduce redness by treating symptoms like broken capillaries and flushing. Lastly, laser vein removal specifically treats the veins that are causing the redness of the face. These treatments can be used either separately or in combination depending on your condition.

Microdermabrasion is not recommended as a rosacea treatment or to reduce redness as it can actually make your symptoms worse.

If you suffer from rosacea or a persistent red face, Dr. Marcia Fleming is here to help you. Please contact us to make an appointment to help you reduce the redness and feel confident about your skin again.

Unless otherwise stated, models are used throughout this website. Individual Results may vary